Unlike my last guest post, you will not have heard of the author of this guest post. Rebecca Herd is a true foodie like me, as you’ll discover below. I met her on Twitter through Bakechat, a Twitter discussion organised by the 2013 bakers from GBBO in which we, as a baking community, asked (and answered) baking queries. I contacted Rebecca knowing that she would not only help and produce a great post (as you’ll read now) but she loved food and could share her passion with others. Hopefully there will be more collaborations with Rebecca in the future because I look forward to see what else she will bring to the table.

When I was asked to write a post for this blog I didn’t really know where to start as it is hard to describe my passion for baking and food in general but I’ve had a go and hopefully it will inspire you to try my recipe and maybe  you’ll find it as great as I do!

I have always had a passion for baking and just food in general. Coming from a family of foodies, I was surrounded by food, both savoury and sweet. My parents own a butchers shop which introduced me to the savoury side of food but my true passion lies with cakes and pretty much any form of patisserie. The majority of my family are bakers, so much so that we have a tradition that over the years has grown to consume the summer months, of entering handicraft and produce shows. Now being the fourth generation to enter these shows is quite an accomplishment but to be able to say that you not only enter but are successful in winning prizes and trophies is something else. When you are surrounded by baking from an early age, it is more than likely that you will develop an interest and when the baking is of trophy winning standard, the skills and techniques you learn are second to none. In a way I have always taken baking, and cooking in general, for granted until I started secondary school. I took any opportunity to cook or bake as it was a way to expand my knowledge and skills further.

By GCSE I had started to gain a reputation for my work and when it came to the coursework I thrived. Many people believe I am slightly crazy when I say I enjoy doing my coursework but the opportunity to make something, that maybe I would not usually, and then be given praise for my work is something special. As the year went on, what I created in these lessons grew and towards the end I was creating complex products, often of my own design and pushing myself as far as I could to create the most in each possible lesson. The hard work clearly paid off as I achieved an A* for my food technology GCSE (only dropping 3 marks for my coursework!). However the grade means little compared to the comment received off my teacher. I was delighted that the hard work I had put in had paid off as I was told that it was “astounding what I could achieve in an hour and 15 minutes”. This deepened my interest and made me truly realise that I was actually really good at baking!

The success of GCSE made the decision to do A-Level the easiest of my life. I knew for sure that I wanted a career in the food industry and I was determined to succeed. My passion was not always recognised by teachers and my school in general. I was lucky enough to achieve a place at a grammar school which is one of the greatest achievements of my life. However, this also meant that the focus on subjects which are not necessarily academically based was often negative especially for A-Level. After a hard campaign, it was accepted and, although there is a large amount of practical work, I can confirm that A-Level food technology is as hard (if not harder) as any other A-Level subject.  With more freedom, A-Level food has enabled me to create food that I want and take my project in the way I wish. It has also made me realise that a career in product development is want I want to achieve.

The decision of what recipe to include in this has been very difficult. I have an ever increasing list of favourites so to choose just one is nearly impossible. However I did come to a decision. I wanted to include something of my own, something original. Therefore I have chosen to include the recipe for my Ginger Fudge Cupcakes. Believe it or not, this actually originated from a cream scone but I believe the final product is much better. 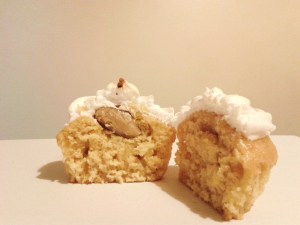