Anyone who has watched The Great British Bake Off will know the writer of this guest post. Let’s say that she was heavily involved in ‘Custardgate’ so much so that she even stole the custard. I contacted Deborah Manger, a former contestant on the show, about the possibility of writing a guest post for me and Deborah was more than happy to help.

I asked Deborah a few questions and then asked her to provide me with a recipe that would feature on the blog and she didn’t disappoint. I’m also looking forward to working with Deborah in the future on more posts on the blog.

What made you want to apply for The Great British Bake Off?

I decided to apply for the ‘Bake Off’ for many reasons. I enjoy a challenge. My family said why not and above all I try to approach life knowing that our memories are really important. I have great memories of my involvement so when I’m older and greyer they will be great times to reflect upon

What was your favourite moment from your series?

My favourite moment which never found its way onto the television was Mary saying “Boy can you make a great Genoise sponge” followed very close behind by my car journeys home from filming with Frances [Quinn, winner of Series Four]

Do people still mention ‘Custardgate’ to you?

They do. I have learnt that most people do it as a friendly tease; such is the usual GBBO viewer.

Have you had any ‘disasters’ in your own kitchen?

Plenty! I defy anyone who cooks and bakes to say they have not. My family, including my cats, are my greatest critics. I know I’ve really failed if the cats turn their noses up at stuff the men reject!

Do you have an idea when you started to bake?

I started to bake when I went to grammar school. I studies home economics up to A-Level. The first thing we baked was a Victoria sponge cake

What do you bake most of, and is there a reason why? Cakes, biscuits, bread or pastry?

I bake a lot of bread. Many flavours and presentations (free form, tin). We need bread for breakfast, lunches and snacks. We do not like shop bought bread. I bake bread every week.  Probably closely followed by cake for ‘pudding/dessert’. With an active teenager in the house cake is a great way of filling him up as part of a meal

Who is your favourite TV chef or cook?

My favourite TV cook/chef has to be Raymond Blanc. I love the fact he was essentially self taught. His skills have grown from living in a family where food and eating matters. He is dedicated to eating food that has been grown/raised as locally as possible and is obviously passionate about his trade.

What would you say is your one and true Signature Bake?

Brunch pies [below]. These are favourites of both family and friends. They are a play on the picnic pork pie with flavours of pork, bacon, tomato and egg, all wrapped up in a thin hot water crust case.

Would you say that how Britain sees baking has changed since GBBO?

I would like to say yes. I think we like watching others but the evidence is clear, the more recipe books and equipment we buy the more convenience foods are purchased. I suspect people like the idea of it but feel under confident in actually following a recipe or process. That’s where my home economics helped me.

What is your opinion on ‘Bingate’, the media blaming Mary Berry for the obesity crisis in the UK and the innuendo complaints as seen on Points of View?

Bingate: I know that what we saw was the bakers being short of space, something we experienced, and the fridges and freezers struggling to cope with all the warm food placed in them. Ian was obviously stressed and his response was to do what we all do in our own home when cooking/baking goes wrong. Having been similarly stressed I do empathise with his reaction.

Obesity: This is a public health issue leading to ill health and placing an enormous strain on health and social care. Individuals need to take personal responsibility for their own health, including weight and levels of fitness. To blame any celebrity is disingenuous.

Innuendo: If you do not like watching the programme because you find it offensive, watch something else.

The key to these pies is keeping the pastry thin thus allowing you to have more filling within. They are a great, late morning alternative to a full ‘English’.

100g smoked back bacon, chopped finely – if you wish to intensify the tomato flavour of these pies, you can buy smoked bacon that has been marinated in tomato ketchup

Salt and pepper to taste

Place the lard, salt and water in pan. Heat until lard is melted.

Pour the lard/water mix into the flour mixture and mix thoroughly to produce a smooth, elastic dough. Place on a floured surface and roll to approx 3mm thickness. Cut six 15cm circles to line the pie rings and six 10cm circles for the lids. When lining the rings roll a ball of excess pastry and place inside some cling film. Use this to press the pastry into the rings ensuring full, thin coverage with no tearing.

Cook the quails’ eggs in boiling water for 2 minutes then plunge into cold water. Peel carefully.

Remove the skins from the 6 small tomatoes and then remove the core and seeds whilst keeping the flesh as intact as possible. Place a quail egg inside each tomato.

Mix the onion, pork, bacon, thyme and seasoning well. Place one dessertspoon of pork mixture in the base of the pie cases. Place the egg in the centre and then cover with more pork mixture.

Place the pie lids on. 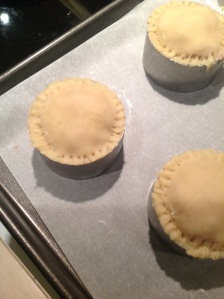 Cut a hole in the top using a 1/2cm metal piping nozzle and crimp or use a fork to seal the edge of the pastry. Glaze the lids with egg wash. 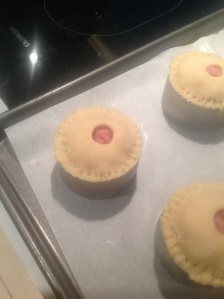 Set the pies aside to cool.

Liquidise the 8 large tomatoes and their vines until smooth. Place in a pan and bring to the boil. Reduce the temperature to simmer for 5 minutes. Use a fine sieve to remove the tomato pulp; the pulp can be kept to use in other dishes. Replace the tomato essence in a pan and heat to reduce until you have 150ml/5fl oz of concentrated essence.

Soak the gelatine leaves in cold water for 5 minutes; squeeze the leaves to remove excess water and then whisk into the warm tomato essence.

Pour the tomato/gelatine mixture through the holes in the pie crust. Leave the pies to cool in the fridge – if the family will allow!