The ninth Signature of Bake Off 2019 was to make 8 identically decorated domed tarts. We saw Alice wow the judges with her Mocha Hazelnut and Orange Tarts and Rosie do the almightiest of comebacks in the Technical Challenge but in the end, it wasn’t enough for her as she become the tenth baker to leave the tent, just missing out on the final! I initially attempted the showstopper sugar glass display but that went disastrously wrong so in the end I settled on doing Domed Princesstårta Tartlets!

I took inspiration from the Princesstårta for my recipe, the Swedish layer cake with sponge, jam, pastry cream, whipped cream and green marzipan. The domed tart challenge reminded me of the dome of whipped cream on top of the sponge layers and so I thought I would make the Princesstårta in a domed tart form. I’ve yet to make a Princesstårta in cake form but that’s on my to-do list! The sweet shortcrust pastry case has a layer of strawberry jam and a pistachio frangipane which is topped with a dome of pastry cream, coated in a green mirror glaze. I use pistachios here to compliment the green colour of the marzipan layer of the Princesstårta.

Frangipane is a usually almond-based sponge that is used as a filling for tarts or Danish pastries and it’s easy to make and even more delicious to eat! I replace the ground almonds in traditional frangipane with ground pistachios, which I toast myself. You are looking for a similar texture to ground almonds when blitzing in a food processor but be careful not to over-blitz the nuts otherwise you will make pistachio butter or paste. Placing a layer of jam underneath makes these really similar to Bakewell tarts, just a pistachio version!

I used a mirror glaze for the domes to give the green colour of the Princesstårta. This was my first time ever doing a mirror glaze and honestly I wasn’t entirely sure what I was looking for. I thought it would be slightly thicker than the glaze I ended up with and so pouring it onto the domes gave me the impression that it was all going wrong but in the end, I managed to get a really thin layer of the glaze which is a good thing! And seeing as it’s Halloween very soon, you can pipe red icing or food colouring over the domes to create a Halloween eyeball! 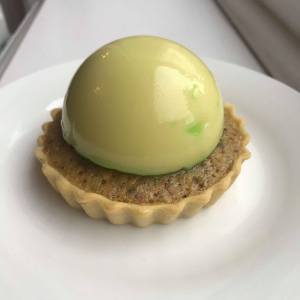 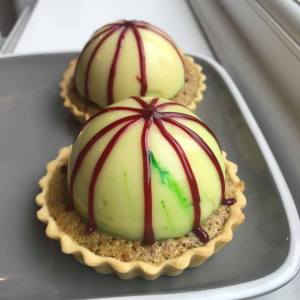 Check out my video guide on how to make my Domed Princesstårta Tartlets below!

For the crème patissiere domes:

For the sweet pastry:

For the pistachio frangipane:

For the mirror glaze:

First prepare the pastry cream domes. In a small bowl, bloom the gelatine powder by mixing it with the water and set aside. In a medium saucepan, warm the whole milk and vanilla over a medium heat, making sure it doesn’t boil over. In a separate bowl, whisk together the eggs, sugar and flour until it forms a smooth mixture. Gradually pour in the warmed milk to temper the egg, whisking constantly. Pour the whole mixture back into the saucepan and whisk constantly until the mixture comes to a boil and has thickened nicely.

Turn off the heat and add in the margarine off the heat and whisk to incorporate. Pour in the bloomed gelatine and whisk to dissolve. Fill 4 of the holes of a 6-hole silicone hemisphere mould with the pastry cream and use the back of a spoon to level out the surface. Cover the mould with clingfilm, making sure it touches the surface and then place in the fridge to set for about 4 hours.

Make the sweet shortcrust pastry by combining together the flour and icing sugar. Using your fingertips, rub the margarine into the dry ingredients until it resembles breadcrumbs. Add in the milk and bring the pastry together into a dough. Tip out onto the surface and knead the dough slightly to smooth out the surface, then wrap in clingfilm and chill for 30 minutes.

Toast the pistachios in a dry frying pan over a medium heat until they begin to turn brown and the nuts begin to give off a toasty aroma. Transfer to a food processor and blitz the nuts until they form a mix of a few larger chunks but mainly a fine coarse crumb, being careful not to over-blitz otherwise you will make pistachio paste. Set aside.

When the pastry is chilled, roll it out on a lightly floured work surface to a large square of 5mm thickness. Divide the square into 4 equal smaller squares and use each square to line a loose-bottomed 4-inch fluted tart tin. Make sure the pastry takes the shape of the tin and use a rolling pin to roll over the flutes to trim the excess pastry. Use the rest of the pastry to line smaller fluted tins. Place the lined tart tins into the fridge and chill while you make the frangipane.

For the frangipane, cream together the margarine with the sugar until it is slightly lighter in colour. Add in the flour and the crushed pistachios and fold to form a thick paste. Beat in the egg until it forms a cake batter.

Preheat the oven to 180˚C. Bring out the chilled tart cases and spread a layer of strawberry jam on the base of each tart case. Divide the frangipane between each of the four tarts and use the back of a spoon to level out the surface. 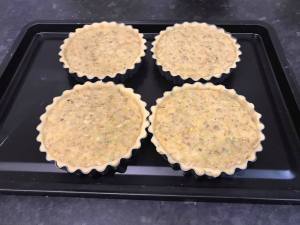 Bake the tarts for about 25 minutes or until the pastry has turned golden brown, the top of the frangipane is golden and a skewer inserted into the frangipane comes out clean. Leave the tarts to cool in the tin for 20 minutes before removing them from the tin and cooling completely on a cooling rack.

For the mirror glaze, bloom the gelatine powder in 40ml water. Set aside. Combine the sugar, liquid glucose and water in a saucepan. Bring to the boil until it reaches a temperature of 103˚C, making sure the sugar has dissolved. Add in the bloomed gelatine and swirl the pan to dissolve. Add in the chopped white chocolate and condensed milk and stir until even and the chocolate has melted. Leave to cool down to about 30˚C.

Place a layer of clingfilm on the work surface and place a cooling rack over it. Turn out the set custard domes onto the cooling rack. When the mirror glaze is at the correct temperature, slowly pour it over the custard domes a few times and allow to set. When it has set slightly, lift the dome from the rack and place in the centre of the frangipane tarts. If you are making Halloween themed tarts, pipe red icing or food colouring over the domes. 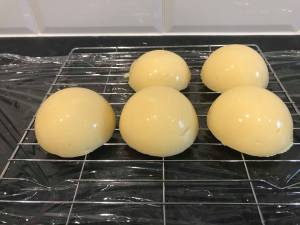