This week saw Bread Week hit the Bake Off tent! With the Technical challenge to make 8 non-yeasted naan breads with garlic ghee cooked using the grill in 1 hour and the Showstopper challenge to make a tiered korovai cake, the bakers had it tough in Bread Week. We saw Rahul claim his second Star Baker title in a row and we also saw Dan claim his second Hollywood Handshake in the Chelsea Bun signature challenge!

This week I am making my version of the signature challenge which was Chelsea buns baked together to be able to tear and share. I decided to go a little off-piste for this challenge, coming up with a recipe that I have never seen before. Here’s my thought process: I was going to use my Cinnamon Rolls recipe as the dough and then use a fruit filling. But I had a bit of a brainwave; would I be able to make a different filling other than just dried fruit? Would a flapjack mixture work inside the bun, seeing as it wouldn’t dry out in the oven, keeping the buns sweet and moist?

It’s certainly something different, it’s a food hybrid that I don’t think I’ve ever seen or heard before. The flapjack mixture is flavoured with cinnamon in homage to my cinnamon rolls recipe I used for the dough and it is flecked with chopped dried apricots in homage to the Chelsea bun. And perhaps surprisingly, it works together. The sweet and lightly spiced flapjack mixture adds a lot of flavour to the basic enriched dough and the filling doesn’t get exposed to direct heat so remains soft on the inside and the flecks of chopped apricot add bursts of sweetness too. 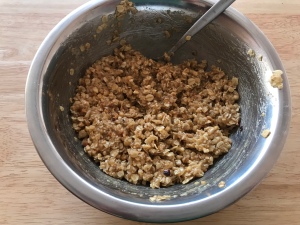 The amount of proving is a lot less than your standard breads; the first prove is only 30 minutes and the second prove is only 45 minutes. Compared to my cinnamon roll recipe, the proving time is 15 minutes longer on both proves. This shorter proving time might not go down well with Paul Hollywood and artisanal bread makers but this recipe makes a really nice sweet bun. I really recommend microwaving the buns if you’re eating them a few days after baking, it softens the bun, warms up the flapjack and just makes it so good!

The dough is enough to make 12 buns but I only have a square baking tin to bake with so I put the other buns into a 6-hole muffin tin to bake. If you have a larger rectangular tin, use that to fit all 12 buns in.

For the bun dough

For the flapjack filling

For the dough, place the strong flour, dried yeast, sugar and salt into a bowl, with the sugar and salt on one side of the bowl and the yeast on the other side. Stir to combine, make a well in the centre and add the egg. Begin to mix the dough starting from the centre of the bowl. When the egg is mixed in, add the melted margarine and enough milk to bring the dough together to form a soft but not sticky dough.

Turn the dough out onto a floured surface and knead the dough for 5 – 10 minutes until the dough is smooth and when you press a lightly floured finger into the dough, it springs back all the way. Place back into the mixing bowl, cover with clingfilm and leave to prove for 30 minutes. 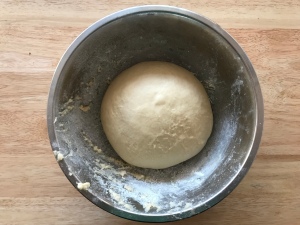 Meanwhile prepare the flapjack filling, soak the dried apricots in boiling water and set aside. Place the rolled oats, plain flour, cinnamon, nuts and the sugar into a bowl. Stir to combine. In a separate bowl, melt together the margarine and golden syrup in the microwave. Pour over the dry ingredients and stir to combine. The filling should be wet enough to hold itself together and only form a large clump if pressed together. Drain and then dice the rehydrated apricots and mix into the flapjack mixture.

Once the dough has proved, knead it again for about a minute to knock back the dough. Take a lightly floured rolling pin and roll out the dough to a large rectangle roughly 9in by 12in. Spread the flapjack filling evenly over the rectangle in a thin layer, pressing down lightly to adhere it to the dough. Trim off any thick edges of dough using a sharp knife.

Starting from the long edge, tightly roll up the dough into a log. Trim the edges and then divide the log into 12 rolls with a sharp knife. Arrange them in a baking tin lined with baking parchment, leaving space to allow the buns to expand slightly; the tin I used was a 20cm square tin and I put the last 3 buns into a greased 6-hole muffin tin. Cover the buns with clingfilm and leave to prove for 40-45 minutes.

Preheat the oven to 190°C. When the buns have proved, sprinkle the tops of each bun with a handful of demerara sugar. Bake the buns for around for 18 – 22 minutes, until the bread has turned a deep rich golden brown all over and a thermometer inserted into the thickest part of the buns reads 92°C. Lift out the buns from the baking tin and transfer to a wire rack to cool fully. 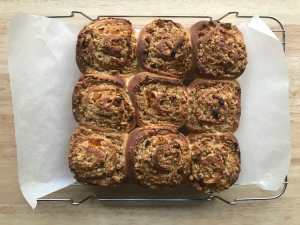 Prepare the icing by mixing the icing sugar with just enough liquid to form a thick but still runny icing. Once the buns have cooled, use a teaspoon to drizzle the icing over the buns. Leave the icing to set before tearing and sharing or slicing the Chelsea buns up.