I was watching a video of one of my favourite YouTubers where she made Valentine’s Day Chocolates which were ridiculously simple to make. These simple chocolates would make a brilliant Valentine’s Day gift for a loved one or a gift for any occasion and are a great easy way to decorate the top of a cake (more on that later!)

You can watch the video here as well as her most recent popcorn recipe!

I had a chocolate heart mould which I bought a long time ago but never found the right time to use it however I was really inspired by this recipe.  And it seems lots of you are going wild for this on Twitter, I’ve had a lot of compliments on them but they look a lot more difficult to make than they actually are. 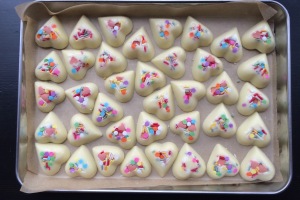 Andrew in the Kitchen’s Guide to Tempering Dark Chocolate

The sprinkles I used were rainbow sprinkles, classic sequin and pink hearts. Try to use contrasting colours so that they stand out against the white chocolate!

This recipe is enough to make 40 of these hearts using my mould which is quite shallow. Unfortunately I’ve tried (and failed) to find a similar one online however any good silicone or plastic mould will work fine. Note that silicone moulds tend be deeper than plastic moulds so you will make fewer chocolates. Since my mould can only hold 20 chocolates, I halved the ingredients into 2 portions.

The use of chocolate buttons helps to ‘quick temper’ the chocolate; this shortcut helps to create a crisp crack in the chocolates. You don’t have to use the buttons, you can chop up more white chocolate instead.

Sprinkles of your choice, a mixture of colours and shapes works well

Place a small handful of sprinkles into the bottom of each space, spreading them out evenly across the base. Set aside. 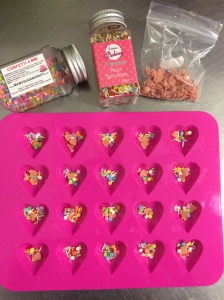 Melt the 240g of white chocolate either in the microwave or over a pan of simmering water.

If you do it in the microwave, you must do it in 20 second bursts to avoid burning the white chocolate; you can tell if you have overheated the chocolate if it starts to go grainy. This also applies to melting it over the simmering water, do not overheat the chocolate. Also don’t take the chocolate too far, once you have a few stubborn bits that won’t melt, let the residual heat of the melted chocolate and bowl finish the melting by stirring.

Once melted, add in the chocolate buttons and stir until melted. This shortcut ‘tempers’ the chocolate creating a crisp crack on your final chocolate. Transfer to a disposable piping bag, twist the top and cut off a small hole at the end.

Pipe the mould full of chocolate, being careful not to overfill each hole and making sure they are all evenly filled. At this stage, slightly underfill them and then shake the mould to remove any air bubbles and make sure the chocolate has surrounded the sprinkles. Then pipe in more chocolate to fill the holes to the top. 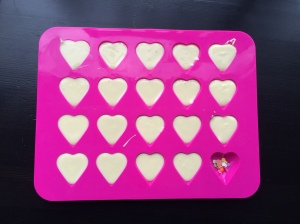 Place into the fridge for about 45 minutes until the chocolate has hardened completely. With a silicone mould, turning out is easy. With a plastic mould, just give the mould a firm tap on the surface or else slightly pull the mould and push out the chocolate from behind and it should pop out.

Return to the fridge until you want to serve. Place a few into some cellophane bags or into an attractive box for a treat for your Valentine this year.

These also make brilliant cake toppers; that’s for next week!