The fourth signature of Bake Off 2019 was to make a cake using a cultured dairy product such as yoghurt or buttermilk. We saw Michael’s experiment with a raspberry cheesecake surprise stick to the tin and we saw David turn to the alcohol by adding limoncello to his cake. I combined one of my favourite fruits, the humble fig, with Greek yoghurt in my take on this challenge, my Spiced Fig and Yoghurt Cake with Yoghurt Buttercream.

The cake has 3 layers of a spiced sponge filled with a homemade fig jam and a yoghurt buttercream. I choose to bake this cake in a loaf tin and split the cake horizontally into 3 layers so that you only need to use one cake tin and you still get a large cake out of it. My loaf tin is a Kaiser 25cm loaf tin but a 2lb loaf tin will do the same job. The fig jam filling is super delicious and can cook away on the hob while you work on greasing and lining the cake tin and weighing out the rest of your ingredients; just give the jam the occasional stir so the temperature is even. The jam is ready when it reaches 104˚C; this is known as the setting point for jam. 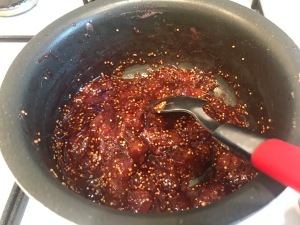 The yoghurt buttercream is a new idea and perhaps one you’ve never heard of before. It’s really similar to a cream cheese frosting, with the Greek yoghurt providing the slightly tangy quality of the buttercream. And with the spices in the sponge and the fig jam, combining it with the yoghurt buttercream gives it the taste of a carrot cake! You need to gradually add the icing sugar to incorporate it evenly without lumps and so that you can judge the texture of the buttercream while mixing to see if it is thick enough and has the texture crumb-coating or filling the cake.

I chose to decorate this cake in the naked style, meaning that the edges of the sponge are slightly exposed through the buttercream layer. The top of the cake gets a border made up of small dots of the buttercream, any fig jam that didn’t go into the centre of the cake as well as sliced chopped figs for the decoration. You could go one stage further and drizzle the figs with honey for extra fanciness.

You might be thinking that we’ve already had the #DairyWeek recipe up on the blog (my Millionaire’s Coconut Ice Shortbread – link to that recipe is here – but I thought I would give both the signature and the showstopper mishti a try too!

For the fig jam:

For the spiced sponge:

For the yoghurt buttercream:

First prepare the fig jam by placing all of the ingredients into a saucepan. Place over a medium heat and cook the mixture for around 10 minutes until the figs begin to break down and the liquid boils. Turn the heat down slightly and leave the jam to cook for about 10 minutes, stirring every so often. When a thermometer placed in the jam reaches 104˚C, pour out the jam onto a small metal tray in a thin layer and place in the fridge until set.

While the jam is cooking, preheat the oven to 170˚C. Grease and line a 25cm loaf tin with baking parchment so that it comes up the shorter sides to easily lift out the cake.

In a mixing bowl, cream together the margarine with the caster sugar and honey until it is light and fluffy. Add in the eggs one by one, beating well until the first egg is incorporated before adding in the second. Fold through the full fat Greek yoghurt. Add in the self-raising flour and the spices and use a rubber spatula to fold the dry ingredients in, stopping until the flour has only just been incorporated. The cake batter will be slightly thicker than normal.

Spread out the cake mixture into the lined loaf tin, using the back of a spoon or a spatula to level out the surface. Bake the cake for about 35 minutes, until the cake has risen, golden brown and a skewer inserted into the centre of the cake will come out clean. Leave the cake to cool inside the loaf tin for about 10 minutes before running a knife around the edge of the tin to loosen the cake and lifting out onto a cooling rack to cool down completely. When the cake has fully cooled, slice the cake into 3 layers horizontally, remembering which is the top, middle and bottom third. 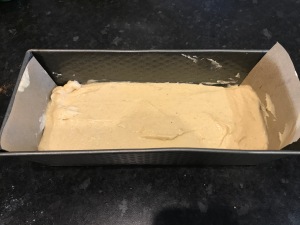 Next prepare the yoghurt buttercream. In a mixing bowl, beat the margarine until it has softened. Add in the Greek yoghurt and beat together until it is smooth. Add in the icing sugar about 50g at a time and beat in each addition until it is incorporated. The final frosting should be smooth and have a spreading consistency. 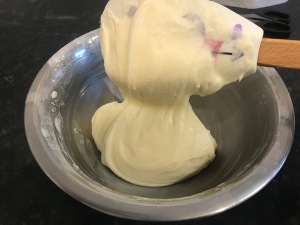 Take the top third layer of sponge and level off the sponge if necessary. Place the cake on a serving board or plate so that the exposed sponge is facing up. Spread a thin layer of the yoghurt buttercream to cover the sponge layer and spread just less than half of the fig jam on top, being careful not to mix the buttercream and jam. Place the middle third sponge on top and top with more buttercream and jam. Place the bottom third sponge on top, bottom side facing up so the surface is flat.

Cover the entire surface of the cake, sides included, with a thin layer of the buttercream to crumb coat the cake. Run your palette knife around the edge of the cake multiple times starting from one end to the other in one continuous motion so that the cake is covered in a thin layer of the buttercream, with the edges of the sponge layers peeking through. Chill the cake for about 30 minutes.

Once the cake has chilled, cover the sides and top with a further layer of buttercream so that the crumb coat layer is covered up slightly but the cake still has a naked cake effect. Place the rest of the buttercream into a piping bag and cut off a small hole off the end. Pipe small blobs of buttercream in a border on the top surface of the cake. Then carefully spread the rest of the fig jam across the surface on the cake; I didn’t have enough to cover the entire surface.

Next cut off a slightly larger hole at the end of the piping bag and then pipe an attractive pattern on the surface on the cake, piping various sized blobs on top – create little scatters of the buttercream blobs, considering space and size, leaving some space for the decoration. Slice the stem and bottom off the figs for decoration and arrange nicely on the surface. Refrigerate the cake for about an hour before serving the cake. As the buttercream has yoghurt in it, I recommend keeping this cake in the fridge.