Today’s recipe post has been highly requested after I posted the photo of these bakes on social media and they were really well received on Twitter and Instagram! These are my Apple and Nectarine Tartlets!

I love this style of tart because it’s just super simple and really low effort. All it requires is square of puff pastry, layers of arranged sliced fruit, some sugar and flavour and it’s ready to go in the oven! I was debating whether to actually post this recipe on the blog because it is just so simple, it’s more of an assembly job but sometimes the simple ones are the best!

It’s important that your nectarines are at the perfect ripeness: underripe and they’ll be easy to slice into thin slices but won’t have much sweetness or flavour; overripe and they’ll be harder to slice thinly and they might be too mushy and soft. And of course if you don’t have nectarines, then you can swap them for any other stone fruit you have such as peaches, apricots or plums, any of these will work perfectly well in these little tarts!

To give the tarts a final flourish and make them look even more appetising, I finish them with a glaze. Now most Mary Berry recipes will call for an apricot glaze but I think orange marmalade does the same trick! I simply heat up the orange marmalade in a bowl in the microwave and brush it on the tarts as they are cooling down. This is a little simple trick that gives the tarts a little attractive gloss and shine which is a bit more upmarket as well as adding a bit of flavour.

The tarts make a great little snack or treat with a cup of tea or paired with ice cream, double cream or custard, they would make a great dessert! You can experiment also by doing a large version of this tart; skip the cutting of the pastry into 9 rectangles and increase the amount of fruit slightly and you may need to bake the tart for slightly longer!

Unroll your roll of puff pastry and cut it into 9 rectangles, measuring approximately 6 inches by 3.5 inches. Arrange the rectangles on the baking trays and using a fork, prick holes on each rectangle of pastry, leaving a 1cm border around each edge.

Arrange the fruit on top of the docked pastry, starting with nectarines and alternating apples and nectarines until you reach the end, layering them as in the photos. 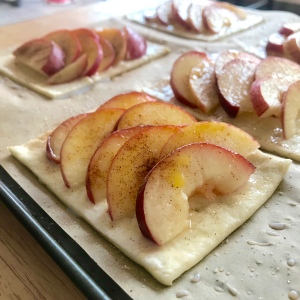 Sprinkle the sugar and the cinnamon over the fruit and pastry evenly. Brush the surface of the fruit with the melted margarine and then brush the pastry with milk.

Bake the tarts for around 20 – 25 minutes until the pastry is a rich golden brown and the pastry is cooked through and is not soggy on the base. Transfer to a wire rack to cool.

Place the orange marmalade into a microwaveable bowl and heat for around 20 seconds to warm and loosen. Use a pastry brush to glaze the surface of the fruit and pastry with the marmalade, brushing quite generously. Serve the tarts on their own or with ice cream or custard for dessert!