Whenever you are ill, do you have your go-to ill food? For many people, it’s probably going to be chicken soup or something along those lines. But I wonder if you have heard of the ill food for many Chinese people; it’s congee, which is a type of rice porridge. This is my recipe for a Simple Rice Cooker Congee with Minced Beef.

Besides being a food for sustenance, congee (jook, 粥) is also eaten as an everyday meal, for breakfast and is commonly fed to young children. I myself had a lot of congee growing up although I have a bit of a love/hate relationship with it. My parents would always put pork ribs in the congee and I hated getting small bits of bone in my mouthfuls; in fact I would rarely be able to finish the rest of the bowl after having 1 small bone. For ages, I would refuse to eat congee. But having been at university for a while, there was a part of me that suddenly wanted congee. You can read a lot more about some of my other experiences growing up as a British Born Chinese by clicking here.

And with that I began investigating how to make congee myself and I found a great method of making it in my rice cooker. The method transforms the humble rice cooker into a saucepan and the only bit of effort it requires is stirring it every so often and occasionally topping it up with water. The result is a great comforting bowl of congee. I have often said that the rice cooker is an essential piece of kitchen equipment. Forget the packs of microwaveable rice or standing over the hob watching your rice to stop it boiling over. Simply wash the rice 3 times in the bowl, add water such that it comes up to the first ridge of your middle finger when you place your middle fingertip of the surface of the rice and simply flick the switch to cook! Of course if you don’t have a rice cooker, you can make congee in a saucepan too, following a similar method.

Traditionally congee is served with a savoury fried doughnut stick called yau ja gwai (油炸鬼) which translates to oil-fried ghost – there’s probably a reason why but I don’t know it myself! It offers a textural contrast as well as something to mop up the congee. Hong Kong breakfast places often serve congee with stir-fried noodles too which I have done here, along with a minced beef and vegetable stir-fry.

The stir-fried noodles are simply cooked, washed under cold water and then stir fried in a frying pan using some salt, black pepper and light and dark soy sauce. The noodles I use are Sichuan dandan noodles, they take 2 minutes to cook and I really like the texture of the noodle. The use of beef mince plays on the fact that you eat congee with a spoon so it needs to be easy to eat with just the spoon!

To give the congee amazing deep rich and strong flavour instantly, while it is cooking I add some Essential Cuisine Concentrated Beef Stock to the rice cooker. Little goes a long way with the stock concentrate but gives congee a much-needed flavour boost. It’s also a tiny throwback to the Bovril that we used to mix into our congee when I was younger. 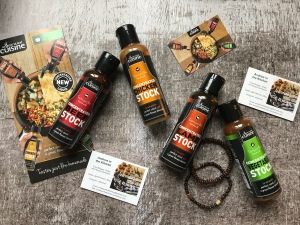 The stock concentrate comes in a small squeezy bottle which makes it so easy to use and to store in the fridge. This 150g bottle is enough to make 4L of beef stock according to the instructions on the bottle. It would be perfect for soups, stews and sauces, as I did for the minced beef. Essential Cuisine stocks do not use any preservatives or MSG and are gluten free. You can find their website by clicking here. Essential Cuisine products can be found in Lakeland and Booths Supermarket as well as many high end butchers, farm shops and delis – or online at this site!

This recipe is enough for 4 people but both the congee and the beef mince reheat fantastically so this is brilliant to make ahead. If your rice cooker is larger than 1.5L, then feel free to make more since it keeps for about 3 days.

1 spring onion, washed and sliced on the diagonal

Wash the long grain rice 3 times under running warm water. Place into the bowl of a 1.5L rice cooker and top with 900ml of warm water. Add the 1 tablespoon of beef stock concentrate as well as some salt and pepper. Place the lid on and switch to cook. When the water begins to boil (times will vary depending on the temperature of the water you used and the rice cooker), remove the lid and add in the frozen sweetcorn and stir occasionally.

While the water boils, brown off the beef mince in a frying pan until cooked through and drain away the excess fat in a colander. In the same pan, fry off the diced onion, pepper and chopped green beans with some salt and pepper for around 5 minutes, adding the frozen sweetcorn at this stage. Return the beef to the pan and break the mince into smaller pieces if necessary.

Drizzle in 2 teaspoons of beef stock concentrate along with 100ml water and allow to cook for around 5 minutes over a medium heat. Mix together the cornflour, cold water and the dark soy sauce in a small bowl and add to the pan, stirring until the beef mix is coated in a thick saucy gravy. If it becomes too thick, add some water and mix through. Taste and adjust the seasoning accordingly. Set aside. 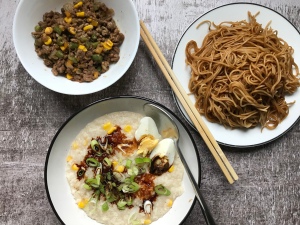 At this point, the rice should have swelled and the liquid should be mostly absorbed. Stir the rice in the rice cooker often, ensuring that it hasn’t stuck to the base. Continue to stir every 2 minutes or so. The stirring motion breaks the grains of rice down making for a silky and smooth congee. As the water begins to get absorbed, the congee will thicken. You may need to add extra warm water if all the water has been absorbed but the rice has not broken down to the texture you desire. I found that I required at least an extra 200ml of water. If at any point it gets too thick, add more water and if it is too thin, allow it to cook until it reaches the desired texture. 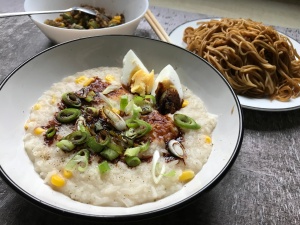 To serve the congee, spoon the congee into a bowl, top with a sliced halved recently hard-boiled egg, a handful of sliced spring onions, a dash of ground black or white pepper and a drizzle of dark soy sauce. Alongside the congee, have a bowl of the cooked vegetables and beef mince with a plate of stir-fried noodles for an authentic and tasty lunch or dinner!