Another year has passed and it’s been another big year for the blog! As the university workload grew in 2017, I didn’t have time to post as much on the blog. I posted 38 times this year but this doesn’t mean that I have posted elsewhere.

This year I launched a YouTube channel. Admittedly it has taken a backseat however I am happy with the content on my channel. I may post again on it soon, perhaps more casual videos as well as food videos but with my hectic schedule currently, food videos may have to wait a while because they take a while to produce and edit!

Instagram has been perhaps my most active social media this year. Whilst I may have not have the number of followers that other bloggers have, the engagement on my posts is still satisfactory to me. I heard that having 20% of your following like your photos is what you should aim for and the majority of my Instagram posts reach that baseline which is great news. Some of them even hit 30% and one of my posts, rather unexpectedly, got 220 likes which at the time was about 70% of my following. Which post was that you may ask? It was my first ever Semi-Naked Cake which I made without measuring any ingredients… check out the YouTube video on how to make it here!

I’ve also been lucky enough to do some more product reviews this year. Harts of Stur contacted me and asked me to review the Smart Bacon Express, which did the rounds on the Internet too. It got a bit of flack on social media for a bit pointless but I certainly understood the appeal of the product, despite being on the pricey side. Backdrops By Lucy also contacted me and asked me to review their Farmhouse backdrop. It made a huge difference to my photos and it elevated my photography to a new level. 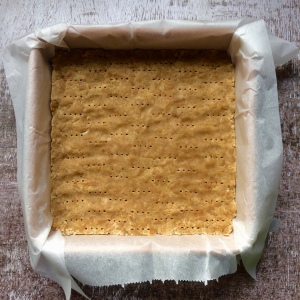 Perhaps the biggest standout blog achievement of 2017 was reaching a total of 50K views at the start of December. It’s amazing to see how many views the blog gets even though I have been slightly less active on the blog this year. Another achievement of note is that for the past 3 months, my monthly views have surpassed the previous month before the last day! In December 2017 I managed to reach 3K views in the month, beating November’s record by well over 500 views! 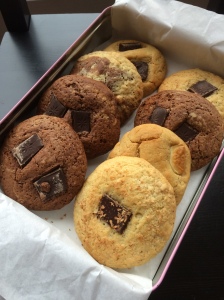 Once again Giant Ben’s Cookies tops the list of recipes viewed. It’s by far the most popular recipe on the blog and it’s hard not to see why, the cookies are so great!! My cheat’s mincemeat recipe did well again with a sharp increase in views as we approached the end of the year. It’s also great to see a couple of Chinese recipes in the Top 10 including my nan’s tong sui recipe (dessert soup) and my Coconut Milk Pudding – definitely check those out!! 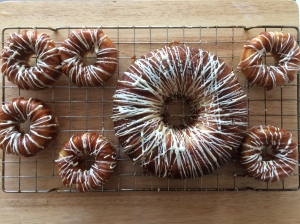 This was actually a recipe that I first posted last year but this large version was made for a pretty special occasion. This year I went to a recording of An Extra Slice again, the theme of the week being Caramel Week. The bake itself wasn’t tasted or featured on the show however I had great fun developing this recipe for a larger version even though it did take 5 hours to make from start to finish… 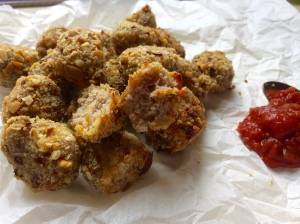 My Sausage Stuffing Bonbons were a pretty crazy invention. When I first made them, I didn’t think they were actually going to work but my word, did they work and they were awesome! It’s a glorified meatball essentially but with the added herby and peppery flavour of Cumberland sausage meat and the timeless flavours of sage and onion stuffing in the crunchy breadcrumb coating. It’s slightly mad and yet also slightly genius! You have to give these a try!

This recipe was developed as a result of a mistake on my part. I originally planned to make gingerbread cutout biscuits but I left the dough in the fridge for too long so it was impossible to roll out but crumbled up beautifully. Then I decided to line a square tin with the crumbled up biscuit dough to make a gingerbread ‘shortbread’ and then I whipped up a cheesecake topping and we have Gingerbread Cheesecake Squares. Definitely give this one a go, not just around the festive season!

While the recipe itself is nothing particularly special or inventive, this recipe post will always be special since it’s the full recipe of my first food video on YouTube. I talked about it earlier on in the post and you can watch the full video above too. 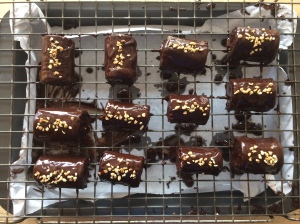 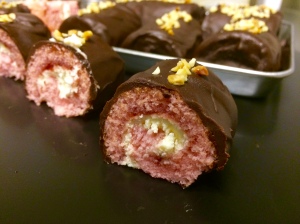 A new series of Bake Off on Channel 4 came with brand new presenters and a brand new judge. Prue Leith set the first Technical challenge to make 12 mini rolls with a peppermint filling. I thought peppermint was a weird flavour so I instead went for strawberry and coloured the sponge pink too for contrasting flavour and colour. I developed this recipe from scratch myself and I’m so pleased with how they turned out.

Black sesame might be one of my absolute favourite flavours and I was so excited to find some black sesame powder for just £1 when I went to Hong Kong this summer. I played around with it in lots of different recipes but by far my favourite was this no churn ice cream. The bitter smoky flavour as well as the charcoal grey colour is addictive and I even made some at uni and it went down well – it’s something a bit different but something you should give a go too!