We’ve all seen the jars of Lotus Biscoff spread in the supermarkets. If you’ve not tried a Lotus Biscoff biscuit before, it’s like a spiced caramel biscuit which is just so addictive!! Spreading it on toast is just the epitome of deliciousness!

So it was to my surprise when I saw that Lidl had released their own version of Lotus Biscoff spread for their Favorina Christmas range. Their Spekulatius spread (which, like Lotus Biscoff, comes in two forms, either crunchy or smooth) retails at £1.49 for 350g which is slightly cheaper than Lotus, whose average price on the 4th December 2016 was £1.75. I couldn’t resist buying it to try and I was bombarded with requests on Twitter to review it.

Tasting it on its own out of the jar (which seems quite student-esque of me!), the spices and the caramel flavour profiles were immediately apparent and I was instantly reminded of Lotus Biscoff. The flavour, however, was not quite as intense as Lotus Biscoff but it was still pleasant and enjoyable. For the price I paid, I was satisfied that it was worth paying for.

Next I tried on toast and none of this fancy sourdough toast, plastic white bread toast! The spread started to melt on the warm toast and as I was spreading it on the toast, the aroma and the spices just screamed the festive season and this was a great breakfast! I’d say that about half of the jar has been eaten in the space of 2 weeks!

Then I had the thought of using it in cupcakes like Jane’s Patisserie did over on her blog! Much like when I was spreading it on the toast, when the cupcakes bake, you can smell the spicy caramel flavour and it’s just one of the best smells ever! I also add a tiny amount of mixed spice and cinnamon to heighten the spice profiles. 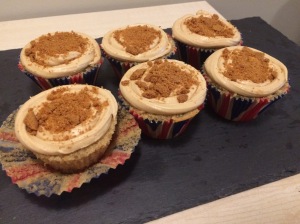 You can check out Jane’s Patisserie’s Biscoff recipes here as well as the first 2 recipes I posted for 12 Days of Christmas:

Spiced biscuits, such as Lotus Biscoff, crushed into crumbs

In a large bowl, cream together the margarine with the sugar and biscuit spread until it is lighter in colour and mixed. Beat in the eggs one by one, beating well between each addition. Do not worry if it has curdled. Sift in the dry ingredients and fold through, adding in the milk at the end.

Using an ice cream scoop, divide the cake batter between the 6 cases, not filling them more than three-quarters full. Bake the cupcakes for around 18 – 22 minutes until an inserted skewer comes out clean. Leave the cupcakes to cool in the tin for 10 minutes before transferring to a cooling rack to cool down completely. 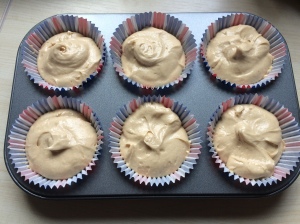 If the cupcakes have a dome, use a knife to trim off the tops so you have a flat surface – but don’t throw the tops away, you can make an ice cream sandwich or whoopie pies with them! 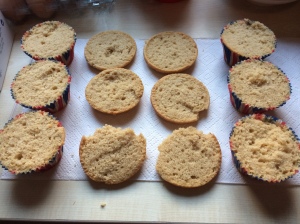 For the frosting, cream together the margarine, cream cheese and the biscuit spread until it is fluffy. Beat in the icing sugar all at once until the frosting is light, the colour of toffee and is smooth. Depending on the thickness, you may need to ask some milk to soften the frosting slightly. Transfer the frosting into a piping bag fitted with a star nozzle. 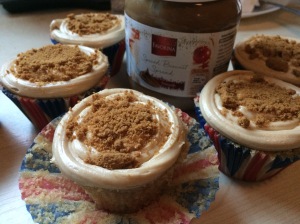 Pipe the frosting onto the top of the cupcakes, starting from the centre, exerting equal pressure moving the bag outwards from the centre. When you get to the end, release the pressure but continue moving in the circle to get a perfectly frosting cake. Sprinkle with some of the biscuit crumbs to finish.