Breakfast is the most important meal of the day, so they say. Usually breakfast is never on my radar, I wake up a bit too late so skip that first meal so I can make it to my lectures. Getting up those 20 minutes earlier should probably be a priority however a bowl of cereal first thing in the morning just doesn’t cut it, you want something heartier and cooked too.

Imagine waking up knowing that breakfast was mere minutes away and it’s absolutely no effort whatsoever, just a simple turning on of the oven, a few button presses of the microwave or a simple flip in a frying pan? Well having a batch of my Bacon and Scrambled Egg Breakfast Burritos tucked away in the fridge ready and waiting gives new meaning to fast food breakfasts! 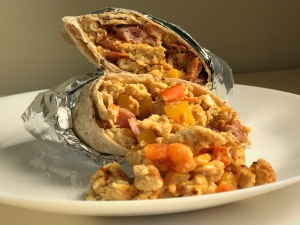 Breakfast burritos aren’t really a culture over here in the UK but they really need to be. Take a (seeded) tortilla wrap, fill it with salty crisp smoked bacon, scrambled egg with peppers and tomatoes and you have breakfast perfection! It’s basic breakfast components but it’s the combination of all these factors that takes it to the next stage. Sometimes, if I have it in the fridge, I’ll add a handful of rocket or spinach leaves for some added colour and pepperiness. Feel free to experiment and change by adding other vegetables to the scrambled eggs – mushrooms, sweetcorn, onions or even adding feta cheese would be good!

The best thing about these burritos is that they can be made ahead. Once the burritos are rolled up, I wrap them up in foil and keep them in the fridge, simply pulling them out in the morning. There are 3 ways to cook these; firstly reheating them in the oven at 180°C, second unwrapping them from the foil and reheating them in the microwave until piping hot through and lastly unwrapping them from the foil and panfrying them on each side to make a breakfast chimichanga. The last method is by far my preferred choice with the crunchy tortilla contrasting the soft scrambled egg being the absolute perfect mouthful!

I made a 1 minute video of this recipe and I shared it over on my Facebook page! Check it out by clicking here and why not go drop a like and share it while you’re over there!

The quantities I put down below will make enough for 2 breakfast burritos so feel free to scale up the recipe to make plenty more!

½ a red or yellow pepper, diced

Lay the bacon flat in a dry and cold frying pan. Place over a medium heat and cook the bacon until golden brown and crisp on both sides. Drain the bacon on a plate lined with kitchen roll. Wipe down the frying pan but do not wash.

Add in a tablespoon of butter or margarine and saute the peppers and tomatoes until softened. Season lightly with some salt and pepper, stirring every so often to prevent sticking.

In a small bowl, beat the eggs with a splash of milk until well mixed. Pour over the sautéed tomatoes and peppers and scramble the eggs with the vegetables until the eggs are cooked through. Allow the eggs to brown slightly on the base, moving every so often. Taste and season accordingly with salt and pepper.

Heat the tortilla wraps in the microwave according to packet instructions. Spread the wraps with a thin layer of cream cheese and lay the bacon in a single layer in the centre. Top the bacon with a good amount of the scrambled egg mixture and then fold the burrito, tucking the filling in on the first roll before folding over the sides and rolling up. Grab a sheet of foil and wrap the burrito inside. Repeat until everything has been used up.

Allow to cool at room temperature before refrigerating for up to 3 days.

To reheat and serve, bake the breakfast burrito in an oven preheated to 180°C for around 15 – 20 minutes until hot. Alternatively unwrap the burrito from the foil, place on a plate and microwave until piping hot. My preferred method is to unwrap the burrito from the foil and place into a dry frying pan over a medium heat and cook until each side is crisp, about 2 – 3 minutes.