You may remember that I told you that I bought some silicone hemisphere moulds from my time in Hong Kong when we went to Shanghai Street in Yau Ma Tei, which you can read about here.

I just couldn’t resist having a play with them as soon as we got back and I decided to have a go at making Chocolate Teacakes. These were the Technical challenge back in Biscuit Week of Series Three of The Great British Bake Off which returns on Wednesday 24th August. And whilst Cathryn Dresser had to “fridge and pray”, I really enjoyed making these not only for the satisfaction when you popped the teacake out of the mould to see the chocolate shell intact. 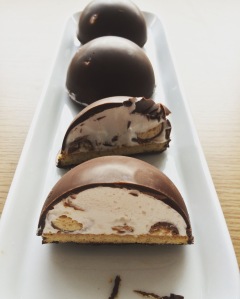 Of course these weren’t easy but overall I found the whole thing a lot easier than I thought because the tempering and shiny shell wasn’t vital to me so I used my quick tempering method for the melted chocolate. This involves melting the chocolate in the microwave and then adding 20% of the weight of the chocolate to the bowl so it cools down the mixture as it melts in the residual heat. This thickens the chocolate, bringing it to the right temperature and viscosity to use. You will find the chocolate sets at ambient temperature however on a hot day, I had to resort to the fridge as it was not setting so the chocolate did look dull but this wasn’t a huge concern to me! 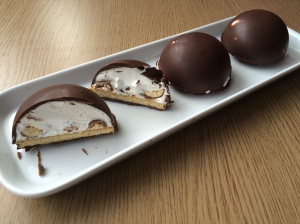 For the marshmallow meringue, I also used a kitchen hack; because my electric whisk isn’t long enough to reach the hob, I filled a saucepan with boiling water and whisked the marshmallow over that, replacing the water every so often. The steam from the boiling water is enough to cook the egg whites, making your marshmallow. The mixing process takes about 6 minutes in total and saves on the gas bill!

I used crushed up pieces of Mr Tom and Maltesers inside the meringue to add extra chocolatey goodness and add texture to the teacake. The peanut brittle bar compliments the chocolate well. You can also make your own digestive biscuits but I had a few to use up so I used the same tempered chocolate to coat the biscuits in chocolate. I then used a cutter to cut out the biscuits so they fit my hemisphere moulds; this also allowed me to use chocolate to help seal the teacakes up.

For reference, the quantities I used below are enough to make 4 chocolate teacakes in a 6.5cm diameter hemisphere mould.

A handful of Maltesers – and some for the cook too!

Place the 200g of dark chocolate into a microwaveable bowl and melt in the microwave in 20 second blasts, stirring after each time. Once it is fully melted, add the remaining 40g of chopped chocolate to the bowl and stir to melt the chocolate. You should find it become thicker and glossy. Sit for a couple of minutes.

Get your silicon hemisphere mould ready and a teaspoon. Spoon 3 teaspoons of the tempered chocolate into a hemisphere and use the spoon to move the chocolate around the mould, making sure that it is evenly coated and not too thick at the bottom. If it’s a cool day, leave them at room temperature to set but if it’s too hot, place into the fridge until you are ready to assemble. Also coat the digestive biscuits with a layer of the tempered chocolate and place onto a piece of parchment and allow to set, again either at room temperature or the fridge. 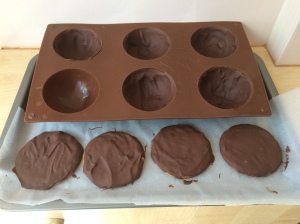 When you are ready to make the marshmallow, fill your kettle full and boil the water. Meanwhile add the egg white, sugar, syrup and vanilla into a bowl whose base fits in your saucepan. Once the water has boiled, fill the saucepan with boiling water making sure that it does not touch the base of the bowl.

With your electric whisk, whisk up the marshmallow meringue for around 6 minutes until it is thick, smooth, doubled in volume and is capable of holding its shape – you can test this by dapping some onto your work surface and it should remain firm and not flop. Place it into a piping bag and cut a 1cm hole at the end. Set aside.

Crush up the Mr Tom bar in the packet and sprinkle it into a bowl. Chop up your Maltesers and place into another bowl. Use a 6cm fluted cutter to cut out your digestives.

Fill the chocolate hemispheres up three-quarters full with the marshmallow. Any leftover meringue can be eaten on its own or used as a topping for cupcakes or as a hidden centre! 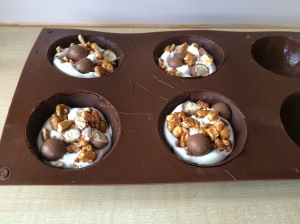 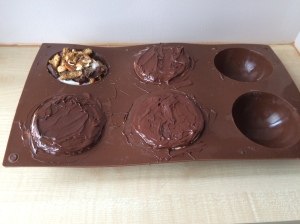 Melt the tempered chocolate again and place into a piping bag. Pipe around the digestive base to cover and seal the join. Use a knife to spread the chocolate around so it is flat and even. Return to the fridge or leave at room temperature to set the chocolate.

To serve, push out the teacakes from the mould, being careful not to leave any fingerprints on the teacakes.